The Racial Wealth Gap and Education

Last week we talked about racial discrimination in the home appraisal industry, a practice which has contributed to the inability of Black families to build generational wealth like white counterparts. Undervalued homes are just one example of many obstacles Black Americans have faced in pursuit of generational wealth. Today, we’re discussing higher education and its relationship to the racial wealth gap.

Education as “the great equalizer” may have been true when Horace Mann made the claim in the mid-1800’s, but it’s no longer the case. Going back several decades into the mid 20th century, graduation rates from both high school and college have steadily increased. The racial wealth gap, however, has remained as wide as it was in the 1960’s. These trends clearly prove that education alone is not the “great equalizer.”

Pursuing higher education can lead people to higher-paying jobs and better financial outcomes, but it comes at a cost for those without generational wealth. Those that can go to college and not enter into massive debt have the upper hand on students that have no choice but to take out loans for college. 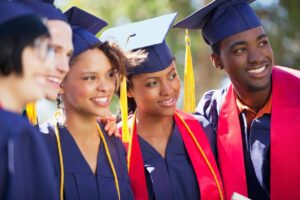 People that currently lack generational wealth must take out loans for college and ultimately can’t build wealth quickly. This is how the feedback loop works to exacerbate the racial wealth gap.

To make any progress on the racial wealth gap, the student loan gap needs to be addressed first. The debt relief announced by the Biden administration this summer is a start to resolving the issue. Giving $20,000 to Pell grant recipients is a racial equity initiative, given that 89% of Black borrowers and 84% of Hispanic borrowers received Pell Grants.

That debt relief initiative alone should not be expected to resolve the student debt crisis or the racial inequities that exist within the student loan borrower population, nor will it solve the racial wealth gap at large.

Education is important to closing the racial wealth gap. However, the current state of higher education is not conducive to achieving equity. President Biden’s student debt forgiveness initiative is a welcome and well-intentioned start, but it doesn’t address the problem of college affordability at its root.

Without addressing college affordability, the student loan debt and generational wealth gaps will continue to widen. The debt burden resting disproportionately on people of color is the result of many decades of injustices across several facets of society. It’ll be very hard to close unless our elected officials address inequities in several institutions – from housing to education, and more.