Amid current inflation highs, we hear chatter every day on the airwaves and in our communities about economic stability. Everyone has their own proposed solution to our economic strifes, but the answer is clear to us; Investing in Black businesses will strengthen our economy at large. August is National Black Business Month, so we’re highlighting how investing in Black businesses would be a strong intervention to permanently stabilize our economy.

Let’s start with some statistics, because there’s no denying that systemic racism in the U.S. led us to the racial wealth gap we see today. According to a Federal Reserve survey from 2021, Black-owned wealth accounted for 2.9% of the country’s total wealth, yet we made up almost 16% of the survey population. Conversely, white Americans owned almost 87% of total wealth, yet comprised only 68% of households in the survey. Reaching racial wealth equality would mean that Black Americans own five times the current amount of wealth held.

Additional statistics show that particularly among small businesses, generational wealth is key to growth. A 2007 study from scholars at UC Santa Cruz, published in the Journal of Labor Economics, found that white business owners were significantly more likely to have had a family member own their business and pass it down, in comparison to Black-owned businesses. Black entrepreneurs are significantly more likely to start from the ground up, rather than inheriting an already-established business.

So, what if there was a plan to both reach racial wealth equality and better the economy at large? The Path to 15|55 Initiative shows us how this can become a reality by investing in and growing Black-owned businesses. Research from the Path to 15|55 Initiative shows that if just 15% of Black-owned businesses were able to hire one more employee, that would grow the American economy by $55 billion, in addition to creating hundreds of thousands of jobs. It’s a clear and proven intervention that will work to eliminate systemic barriers, while growing the economy. Path to 15|55 is working to secure investments from larger entities, but what can we as individuals do to help? 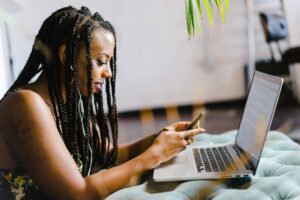 Firstly, individuals with the capital to invest in Black business absolutely should. Most folks, however, don’t have that much extra money laying around. On an individual level, we must encourage all friends, family, and allies in our lives to support Black businesses. Speak to everyone you know about amplifying Black-owned business on social media and giving them reviews on platforms like Google or Yelp. Spread the word about the ways we support and advocate for Black-owned businesses, because striving for racial wealth equality benefits all of us in more ways than one.