Serena Williams and the Racism Faced by Black Athletes in America

Sports and politics often intertwine themselves in American history. Jesse Owens defied Adolf Hitler at the Olympics, Muhammad Ali tossed a gold medal in the Ohio River, and Jackie Robinson played baseball amid racist death threats. These moments were all expressions of the fight for equality.

Now, decades removed from those events, the coexistence of sports and politics has returned to the national zeitgeist.

Williams’ historic on-court success hasn’t prevented her from joining the fight for equality. From penning essays against systemic racism to pointing out double standards within tennis, she has given other professionals an example of how to use their voice for good. And as a result, she’s been met with racist vitriol in the media and sports industries. 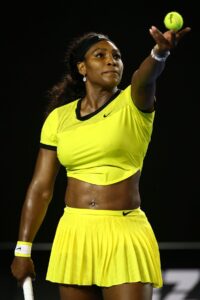 Williams has been drawn in racist caricature and been subjected to a disproportionate number of drug tests. Additionally, she has dominated a sport with a pronounced history of patriarchy and racism.

Her career, and the careers of hundreds of others, highlight the dissonance between allyship and sports fandom. The “shut up and dribble” crowd will reject any political expression from athletes of color. For decades now, white America has gone from rooting for Black athletes on Sundays to crossing the street to avoid them on Mondays.

The George Floyd protests in 2020 brought these conflicts to the limelight once more. The NBA let athletes swap names on jerseys for social justice slogans while Big 12 Conference athletes implored fans to “cheer for us beyond [the field].”

It’s a good thing that these issues have come to the forefront of conversation among sports fans. Progress can only happen once we all recognize our privilege and listen to the experiences of people of color, including our sports heroes.

Until peaceful protest by athletes is met with unanimous approval, sports will continue to be a vessel for social change in America. Athletes possess a huge soapbox to stand on. They should feel comfortable using their platform for good and speaking out against injustice. If they lose some “fans,” who cares? If fighting for equality causes spectators to abandon their favorite teams, they were never fans to begin with.