Transportation has long been a major culprit of air pollution. In 2019, the Environmental Protection Agency concluded that cars, buses, and trucks constituted 29% of our country’s total greenhouse gas emissions – that’s more than agriculture, industry, and electricity. Our country was built around automobiles that accelerate climate change while putting off noxious fumes and dangerous chemicals. Thankfully, the rise of electric vehicles is more evident every day. But we mustn’t let that blind us to the reality of severe air pollution.

For example, automobile exhaust contains airborne particles that are 2.5 micrometers in diameter, or PM2.5, that while invisible to the eye, have disproportionate consequences for Black and Brown citizens.

A Union of Concerned Scientists study from 2019 concluded that communities of color are disproportionately and dangerously exposed to air pollution throughout the United States. On average, Black and Brown citizens breathe 66% more car-based air pollution than their white counterparts. Meanwhile, white residents constitute 85% of people living in areas with low PM2.5 counts. All told, over 16 million people of color live in areas with PM2.5 counts higher than the average of the state in which they live.

Essentially, our communities of color are constantly inhaling polluted air that other groups don’t have to worry about. Over time, the effects of such permeance can really mount a toll. Breathing PM2.5 particles can lead to adverse health effects like respiratory and cardiac illnesses, which can become chronic if not treated properly. This is made all the worse considering our widespread racial disparities in healthcare.

These gaps in healthcare in turn hurt economic productivity. Minorities are more likely to occupy low-income jobs that don’t offer sick days or insurance coverage. Constant exposure to PM2.5 is not only significant to one’s health, but also their ability to earn a living wage and provide for a family. This is not just a health issue, rather, it’s a socioeconomic issue.

If you’ve read our blogs for a while, you can probably guess why this is.

For decades, our institutions redlined communities of color by purposefully denying them home loans, essentially segregating neighborhoods by race. The Federal Housing Administration (FHA) spearheaded this effort, beginning in 1934, while also subsidizing builders that were mass-producing subdivisions for white families. The FHA even required that none of the cheap, new homes would be sold to Black families, a state-sponsored disparity that shows up on maps even today. Local lawmakers used these clear racial boundaries to refuse investment in majority-minority areas, which is why we see things like heat inequality and a lack of investment in public transportation.

Redlining is the original sin for so many of the disproportionate impacts that minorities face in this country, including exposure to car-based air pollution.

In response, we must pursue common-sense, equitable solutions. Many have accordingly called for the construction of a nationwide charging network for electric vehicles. This level of infrastructure development would not only create a framework for the widespread use of renewable energy but could also generate jobs for under-resourced communities. Installing electric vehicle chargers in metropolitan areas is similarly an innovative way to spur private investment in historically neglected areas. Suddenly, new businesses and high-paying jobs could become the norm. 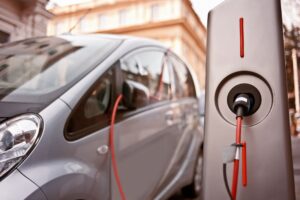 But like all lofty public policy projects, equity is key. Without someone keeping an eye out for communities of color, there’s no guarantee that such a project would set up shop in our neighborhoods, from Atlanta to Los Angeles. If money follows money, then it’s entirely possible that such an electric charging network would ignore majority-minority areas, despite the well-documented and disparate health impacts of air pollution. New infrastructure is well and good, but without committing to equity, it’s ultimately more of the same.

The wellbeing of communities of color is simply more sensitive to the effects of climate change. Redlining, underinvestment, and discrimination all ensured so. It’s time we move forward from these historic injustices, not with empty-handed rhetoric and stump speeches, but rather with justice in mind and billions of dollars in hand.